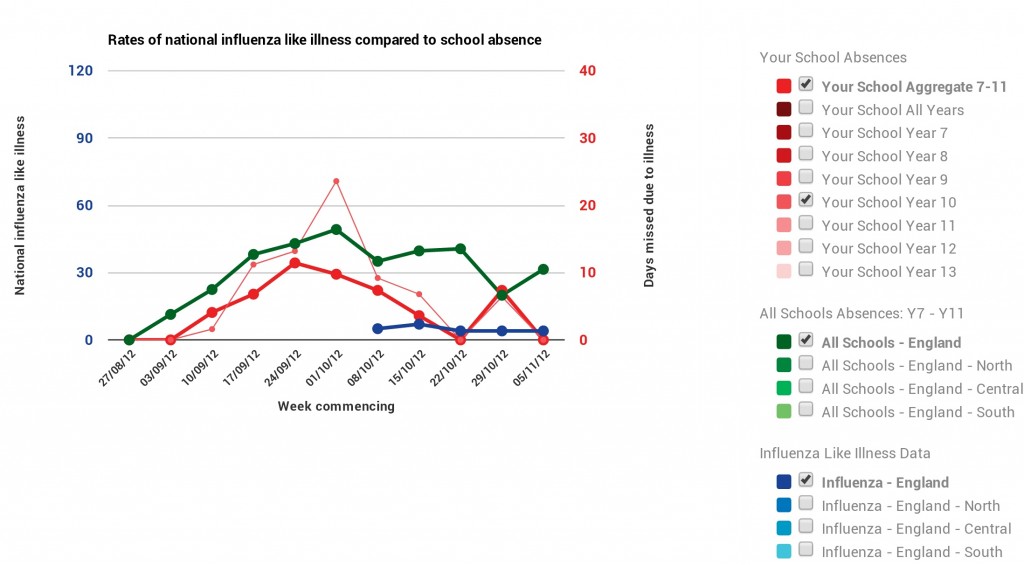 This year has started following the pattern we saw last year.  Absences were very low at the beginning of the year (presumably a combination of well-rested students and a “fresh start” mentality).

The national GP data has only started kicking in recently but it’s fair to say there’s no evidence of a peak so far.  As before, our school seems to be maintaining a lower-than average level of absence illness. This could be due to the students coming here being from good homes. If students are well looked after at home, it’s likely they’ll be less prone to getting ill as their immune system will be better prepared to defend itself from illness.

There appeared to be a lot of people with a cold-type illness in the middle of the half term although it seems as if the absences at this time did not organise themselves into being particularly high – they seem within the region of the natural variation we would expect. Most year groups experienced a small positive blip in absences on the week commencing the 24th September but year 10 took a dramatic jump the following week. It’s interesting to note that whilst the national school average data peaked this week, our school average data did not even though year 10 had  big spike here. All of this could just be down to natural variation: year 10 is a far smaller sample size than the whole school.

We will certainly be trying to find out what happened that week though. Was it a random fluctuation or was there genuinely something different happening to year 10 that week?