In week four there was an increase in the number of school absences, similar to a peak just before the Christmas holiday. Was this due to flu, or are there other possible explanations?

It would be fair to say that Shane and I had a fairly nervous but exciting telephone conversation last week. Our absence data for week four was showing a peak similar to the one just before Christmas when the levels of flu from national surveillance systems were high. Did this new peak suggest that we were about to see a second peak in flu this season when the national flu indicators were all still low? 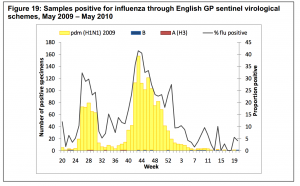 Graph of swine flu data showing a peak just before the school holidays and another peak just after school return. Graph taken from the HPA National Influenza Annual Report.

This wouldn’t be the first time that there’s been a second peak of flu in one season. During the swine flu pandemic, levels of flu were very high just before the summer holidays. Schools broke up, levels dropped during the holidays, and  then peaked again a couple of weeks after the start of the new school year in September. These and other results show just how important we think schools are in the spread of flu.

So what’s going on during week four in our schools data? Before epidemiologists consider something as being a real effect, or truth, we like to consider some other possible explanations for our findings:

So there are a few possible alternative explanations for the blip and right now the honest answer is that I’m not sure whether it was really due to flu or not, but my feeling is that it was due to chance. This little bump in the data has given me a lot to think about though especially as the national flu data was quite low during that week and I’m certainly going to be watching the data closely over the next few weeks to see how things progress.