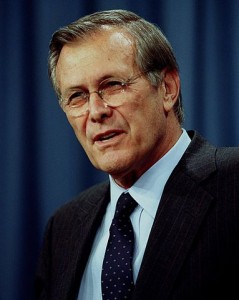 In 2002 Donald Rumsfeld (the former United States Secretary of Defense) made a famous speech describing categories for what US intelligence services did and didn’t know about Iraq and it’s supply of weapons of mass destruction. One of Mr Rumsfeld’s categories was called the known unknowns. To clarify what he meant Mr Rumsfeld explained “we know there are some things we do not know”.

When it comes to influenza we also have some “known unknowns”. For example the timing and size of a peak in illness due to flu in England and Wales is a “known unknown”. We can be reasonably certain that we will be able to detect some sort of peak, but don’t know how much of an increase this might be and when it will happen. However, if a peak does occur it is likely to happen over the coming weeks, which makes the data you’re submitting during this period particularly important and we’ll be looking at it very closely.

One of the ways epidemiologists try to reduce uncertainty around these known unknowns is by looking at what happened in previous years. Every year the Health Protection Agency produces excellent detailed reports summarising the previous season. Last winter they saw quite a high number of people with influenza like illness (ILI) going to see their GP, in fact the highest numbers since 1999/2000.

What happened in 2010 was not that unusual, but the year before that, was quite different. In 2009 we had a flu pandemic, as swine flu spread internationally. We also saw two peaks that were much more spread out.  The first was in mid/late-July 2009 and the second started at the same time as schools started back in the autumn and peaked in mid-October 2009. So what will this year’s known unknowns look like? Well we don’t know, but hopefully you’ll be here looking at the data with us as start to find out.

Posted on December 6, 2011 by Katie Tomlinson | Leave a comment