The data collected for year 8’s seems to be following the national average, with most weeks below other schools. There is however intervals where the number of illness absences of year 8’s at our school seem to exceed the national average. Being in year 8; the pupils are more motivated to attend school. With our school being a high achieving school, they would not want to miss school and attend every day. With this attitude, the pupils would attend school even with flu, and would therefore pass on flu to the other pupils and lead to a domino effect as everyone would attend school until it is severely unbearable. According to the records of doctor visits, the highest rate of flu would be over the Christmas holidays; however we cannot collect data during holidays and would not be able to see the trend with the national forecast. 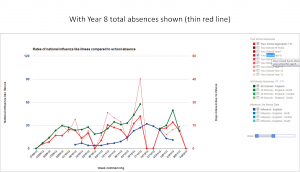